Little Léa Corbin has been wearing bilateral cochlear implants made by Sonova brand Advanced Bionics since she was a baby. Her language development has been impressive, and her parents and Sonova employee Adrian have been with her every step of the way.

Little Léa is running backwards and forwards between kitchen and sitting room in excitement. Visitors will be here any minute and she wants everything to look nice. “Have I got everything, mom? Where shall I put it all? Oh, I’ll put everything over there.” This bright little girl in a colorful floral blouse celebrated her fourth birthday in August 2018. She is now four-and-a-half and can already read a little. Her language development is also coming on in leaps and bounds. “She spoke very well at an early age, starting to formulate sentences at two. People on the street are always telling me how impressed they are with her speech,” explains Marlène Corbin, her mother, with justifiable pride, as Léa has had profound hearing loss since birth. That she has learned to speak so well is all down to the work her parents have put in – and to her Advanced Bionics cochlear implant system.

Adrian Travo, the visitor Léa has been awaiting in such excitement, is Advanced Bionics’ Clinical Engineering Manager in France. In October 2015, he personally activated the devices for the girl from the small town of Nogent-sur-Seine, about 60 miles southeast of Paris, and since this first meeting at the clinic, he has followed the little girl’s progress with great interest. He too is full of admiration: “Léa is extraordinary. She’s an excellent example of how a young person can develop when all the parameters mesh together perfectly.” The close, trust-based cooperation between her parents and Advanced Bionics has also been key. Adrian Travo says he has tremendous respect for Léa’s mother in particular: “Her commitment has been exemplary.”

Marlène Corbin, who has three children, discovered her youngest’s profound hearing loss herself. “Everything seemed OK at the newborn hearing screening, and they had told me at the birth that she could hear. I began to have my doubts as she turned four months, however; she didn’t react if the dog barked or I called her. She would only jump once she could see me.” Marlène Corbin went to several doctors, virtually all of whom told her she was mistaken. Her suspicions were not confirmed until they visited the pediatric hospital in Paris: Léa could hear nothing in either ear. 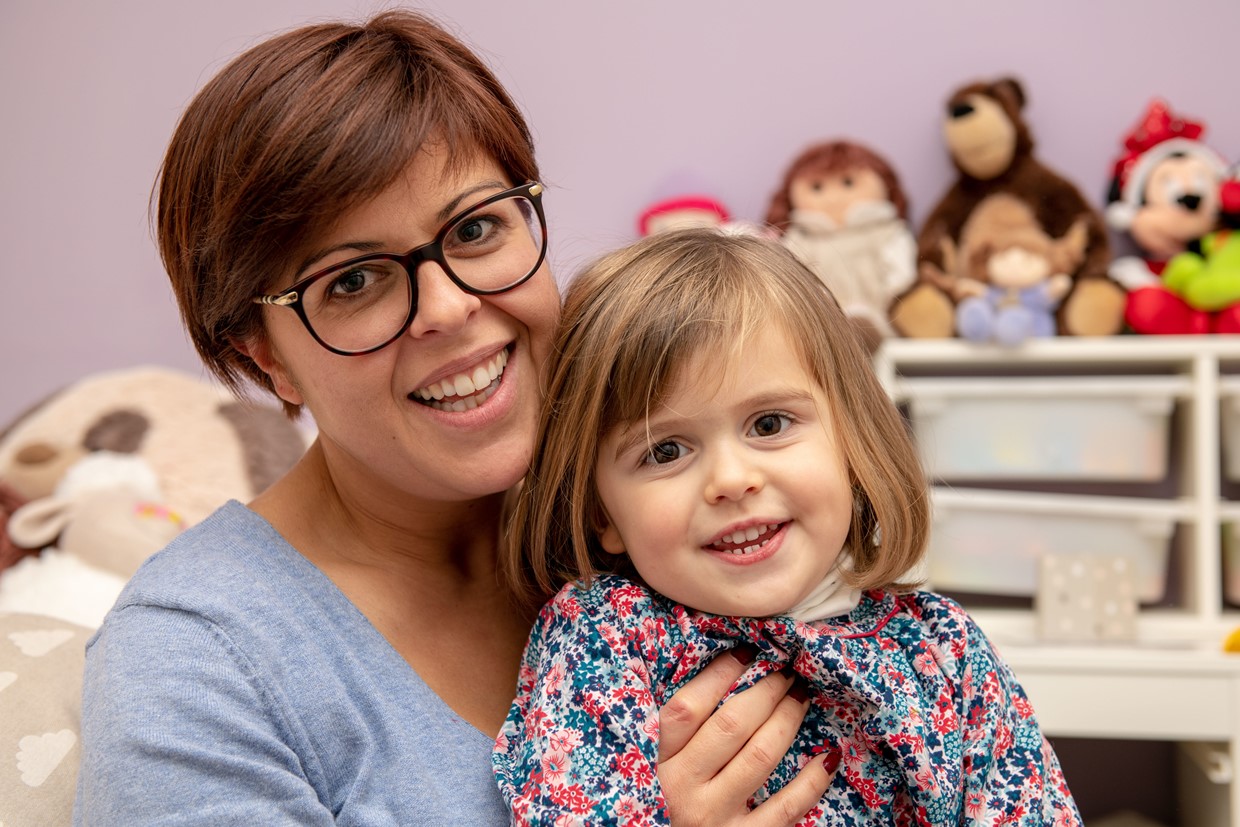 After the diagnosis, her mother did some internet research, gathered information via special Facebook groups such as CISIC, contacted other similarly affected mothers, and learned games and listening exercises from a speech therapist to promote her daughter’s language skills. The parents soon realized that Léa would need hearing implants: “We definitely wanted Léa to learn how to speak so she would also have the same opportunities in the future as other children.”

In September 2015, Léa Corbin was finally operated on in Paris at the age of 13 months – initially, one ear was treated, followed by the other, four months later. The family met Adrian Travo at Léa’s device activation, where she heard noises and sounds for the first time in her life. He himself wears Advanced Bionics cochlear implants that are clearly visible on a scalp he has shaved specially for the purpose. “We were extremely impressed the first time we saw an adult with a cochlear implant system. It gave us confidence and reassurance for Léa’s future,” recounts Madame Corbin, thinking back.

Travo got to know the family better at regular follow-up examinations, and took a close interest in Léa’s aftercare over the next few years. This contact has developed into a strong bond of friendship with the Corbin family that is very special to Adrian, not least as he has monitored the little girl’s progress since her very first experiences with hearing.

Léa goes to the normal kindergarten in her neighborhood, and the little girl puts on her mother-of-pearl-colored transmitter coils herself every morning. These devices, which look like little buttons, are fixed magnetically to the scalp, where they relay the digitized sounds from the sound processor to the implant’s receiver. Léa self-confidently declares she has brought her classmates up to speed on her hearing equipment: “When I put these buttons on my head I can hear, when I take them off, I can’t.” Her cuddly toy, a monkey called Lulu gifted to her by Advanced Bionics, has the same buttons on his head as she does – only his are blue. “Lulu has already come to school with me. I showed him to everyone. Now my friend wants the same devices as Lulu and me!”